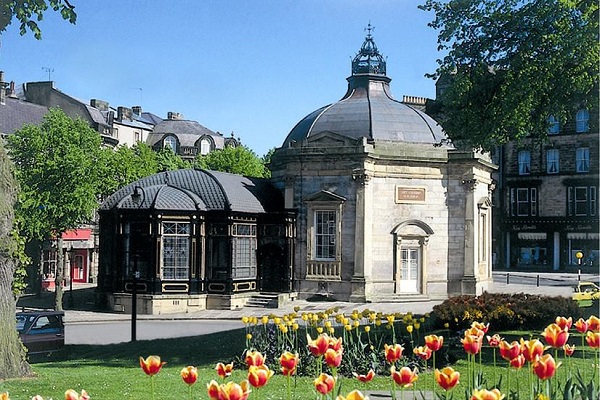 First built in 1842, it wasn't unusual for 1500 glasses of water to be served each morning. The museum now tells the fashionable story of Harrogate and the daily spa routine, a place for health and happiness.

William Slingsby discovered the first spring in 1571 in the area now known as High Harrogate. It was named the Tewit Well Spring and the water coming from this spring was found to be medicinal. People, rich and poor, began to come in increasingly large numbers to test the curative powers of the waters.

From the 1800s, more and more spa buildings were built to meet demand. One of these was the Royal Pump Room (the building that now houses the museum), a grand octagonal building opened in 1842 to replace the earlier building that had covered the popular Old Sulphur Well.

Under cover from the elements, and at a charge, the water was served in a glass and customers could enjoy bands while they promenaded in the building. To meet the needs of the poor, who also continued to require access to the sulphur water, a free tap was provided outside the building. This tap remains to this day, although it is no longer recommended for drinking!

There was an established daily routine at the Pump Room. Visitors would arrive between 7am and 9am and drink one or more glasses of water. Afterwards they would join the promenaders outside where they would concentrate on fashion, gossip and music before taking breakfast. Shortly afterwards the chronically sick would have hot bath treatments, whilst others would go shopping, sightseeing or attend parties. Doctors recommended that the basic length of ‘the cure’ should be for a period not less than three weeks.

The treatment element of 'the cure' was received at other sites in the town. In the early days of the spa town, waters would have been collected by hotel staff for their residents and brought back to the hotel for them to bathe in.

However, specialist spa treatment establishments were later developed in the town. One of these was the new Victoria Baths, which opened in 1871 with separate treatment rooms and bathing pools for men and women.

This was followed by the Royal Baths, which opened in 1897. The Royal Baths were designed to provide a luxurious setting for specialist hydrotherapy treatments to compete with other European spas.

Venues were also established in the town to cater for the society element of spa town life and provided places for socialising and entertainment. Visitors could gather and socialise at the Promenade Room, which was built in 1805 and remodelled by Arthur Hiscoe in 1875. This building is now the Mercer Art Gallery and is home to Harrogate's fine art collection.

Discover Harrogate's connection to Russian royalty and what politicians and famous writers of the 19th and 20th century thought of their visits. Charles Dickens described Harrogate as the queerest place with the strangest people leading the oddest lives!