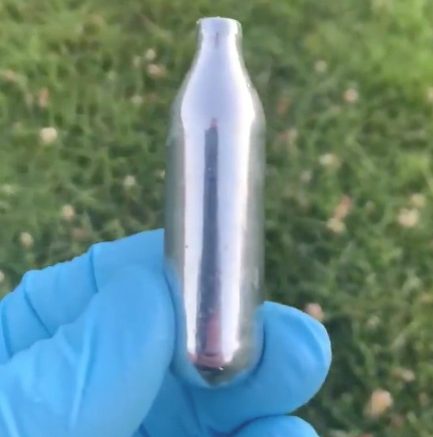 North Yorkshire Police have issued a warning to young people and parents about the dangers of inhaling nitrous oxide.

The warning comes after officers have reported seeing an increase in the number of empty canisters they are finding while patrolling North Yorkshire, especially in areas where young people are known to meet and congregate. A number were found amongst litter and rubbish left on The Stray in Harrogate this morning.

Concerned for young people’s safety, police are wanting to highlight the potential dangers of inhaling the gas and are calling for parents to be vigilant for the signs that their children may be purchasing the substance online.

Nitrous oxide, more commonly known as laughing gas, nos, whippets or chargers, has a number of commercial uses, mainly in the food and catering industry where it’s sold in small silver canisters to be used as a propellant in whipped cream dispensers. It’s these empty canisters that are becoming a common site for officers patrolling parks and open spaces.

People may believe that because this gas is widely available and easily purchased, that it is harmless. However, inhaling this gas can lead to unconsciousness and ultimately suffocation, as the body is essentially starved of oxygen. There is also evidence to show people with heart conditions can be at higher risk of harm and that inhalation can lead to anaemia or long term nerve damage. So when you know the risks irresponsible use of this gas poses, it’s not so much of a laugh is it?

I’m asking our young people to really think about their actions and the possible consequences it could have. Please ask yourself if the risk of inhaling this substance is really worth the few seconds of feeling high? Visit talktofrank.com for more information on the risks of this gas.

I’m also asking parents to be vigilant for the signs of nitrous oxide and speak to their young people about the risks associated with it. As mentioned, the gas is sold in small silver canisters and is usually inhaled through a balloon. So if you have seen paraphernalia in your home which matches these descriptions, please have a conversation and ensure your child is safe.

To the local community, I would ask that if you see any suspicious activity where you think nitrous oxide is being consumed, please report it to police on 101 and our officers will visit the area.

1 in 3 people in Harrogate, targeted by a scammer since lockdown began says Citizens Advice