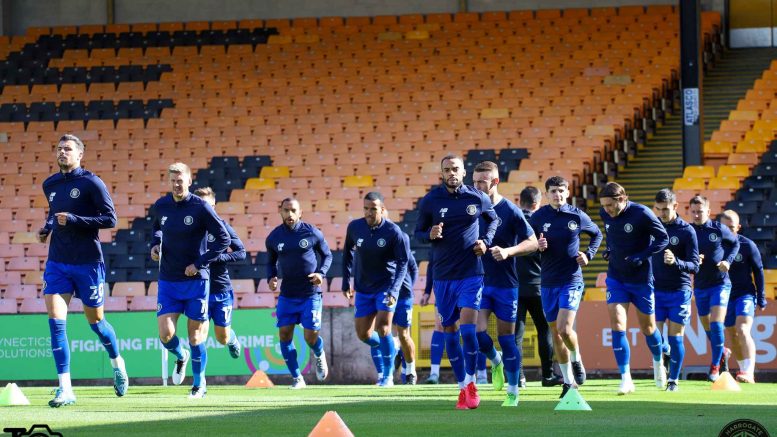 Harrogate Town maintained their unbeaten record in League 2,when they came away from Vale Park,Burslem,with a point from a goalless draw.

Simon Weaver started with Mark Beck replacing Jack Muldoon who was still not quite over a tight muscle injury sustained in last Tuesday’s win at Notts County.

Both sides started slowly,although the Valiants had the ball in Town’s net after 12 minutes through Dave Worrall,only for the goal to be ruled out for a foul on Warren Burrell.

Home skipper,Leon Legge headed  a cross from Rodney past Joe Cracknell’s post,but Town were the next to threaten.Josh Falkingham’s pass released Ryan Fallowfield and his cross found Aaron Martin who tested home keeper,Scott Brown with a fine header.

After a cagey opening to the second half the Valiants almost took the lead on 64 minutes.

Nathan Smith’s run took him to the byline and he cut the ball back for Worrall to shoot against the upright.

Town were forced on to the defensive as second placed Vale pressed for their third league win of the season.

Conor Hall was majestic in defence and Will Smith made a vital,late block from Tom Conlon to deny Vale all three points.

Between 10pm and 10.30pm on 23 December 2020, a man was walking along Priest Lane in Ripon when he was approached by individuals who assaulted him, before making off in an unknown direction. The man suffered a fractured nose in the incident and received hospital treatment. Police are requesting the public’s assistance to help establish the full circumstances surrounding the incident. In particular, we are appealing for anyone who may have been in the Priest Lane area of Ripon at the time of the incident or who may have dashcam footage or CCTV. Anyone with information that could assist the
The postRipon assault investigation appeared first on Harrogate Informer Harrogate Informer…