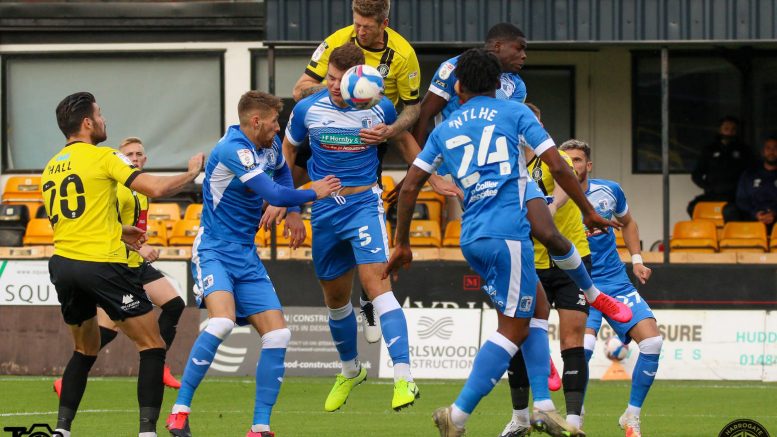 Harrogate Town celebrated their return to the new look, EnviroVent Stadium, with a gutsy win over old rivals, Barrow.

After a cagey start that saw the Town defence deal with a series of Barrow corners,the Wetherby Roaders struck the decisive blow after 22 minutes.

Will Smith’s long ball through the visitor’s defence released Jack Muldoon on goal and he flashed a powerful drive inside Joel Dixon’s near post.

A couple of set pieces from George Thomson provided chances for Muldoon and Smith which came to nothing, and it was the Cumbrians who threatened just before the break when Josh Kay’s strike forced a good save from James Belshaw.

Early in the second half a rasping drive from the mercurial Lloyd Kerry tested Dixon and sub Brendan Kiernan’s effort almost saw Jason Taylor concede an own goal.

Aaron Martin,who had replaced Jon Stead with about twenty minutes left, flicked on to Muldoon,but Town’s top scorer couldn’t hit the target from a tight angle.

Barrow had to survive another late chance from Muldoon,but Town coasted to a win, which saw them advance to seventh in League 2.

Since being founded in 1952, Belzona Polymerics has grown into one of the world leading providers of high-performance polymeric repair composites and protective coatings. Originally established in Elland, Belzona has evolved into a multinational business, with head offices now in Harrogate, USA, Thailand, Canada, and China. Despite this level of growth, they are still committed to the importance of giving back to the local community in Harrogate and Yorkshire. Launched at the beginning of 2016, Belzona’s 1% Club Initiative gives employees the opportunity to spend 1% of their working time volunteering. Every year, Belzona chooses local charities to provide dedicated
The postHarrogate manufacturer’s continued efforts to give back to the community appeared first on Harrogate Informer Harrogate Informer…

Harrogate sustained their second League 2 defeat of the season when they went down to a 2-1 defeat at Colchester United. Town took to the field with the same starting line up which defeated Grimsby last Tuesday evening. The first half was dominated by the visitors with Calvin Miller,Connor Hall and George Thomson all failing to convert early chances. Halfway through the half a defensive mistake by Cohen Bramhall almost let in Martin but Keeper Dean Gerken quickly smothered the striker’s effort. On thirtyseven minutes,Martin suffered a painful collision with the post and had to be replaced by Jon Stead.
The postHarrogate sustain second League 2 defeat of the season appeared first on Harrogate Informer Harrogate Informer…

Rural businesses can take great confidence for the future from a growing appreciation of nature and the countryside, an audience of rural women heard. Restrictions on everyday life this year, triggered by the coronavirus pandemic, starkly show the value of the great outdoors as well as the genuine sense of community that can often be found in countryside communities. A wide range of timely messages of encouragement and empowerment, as well as powerful testimonies of overcoming adversity, were shared during an Autumn Gathering of the Women In Farming Network. The group, established by registered charity the Yorkshire Agricultural Society, provides
The postStories of resilience deliver rural encouragement appeared first on Harrogate Informer Harrogate Informer…

The West Yorkshire and Harrogate Health and Care Partnership (WY&H HCP) has published its report Housing for Health. The report contains a collection of local case studies that provide evidence of how well-designed and person-centred housing support initiatives have a direct positive impact on people’s health and wellbeing. Housing is one of the significant determinants of health and wellbeing (Public Health England 2018). The adverse impacts on physical and mental wellbeing of living in an unhealthy home can be profound, particularly for children and their long term health. For older people, living in an appropriately adapted and accessible home with
The postWest Yorkshire and Harrogate Partnership publishes Housing for Health Report appeared first on Harrogate Informer Harrogate Informer…