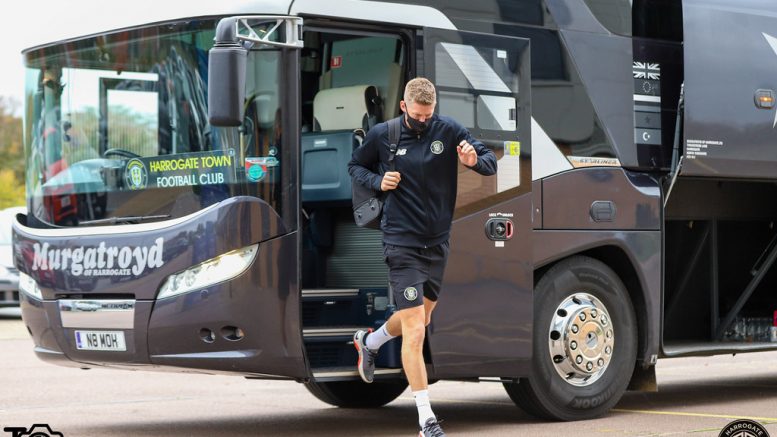 Harrogate sustained their second League 2 defeat of the season when they went down to a 2-1 defeat at Colchester United.

Town took to the field with the same starting line up which defeated Grimsby last Tuesday evening.

The first half was dominated by the visitors with Calvin Miller,Connor Hall and George Thomson all failing to convert

Halfway through the half a defensive mistake by Cohen Bramhall almost let in Martin but Keeper Dean Gerken quickly smothered the striker’s effort.

On thirtyseven minutes,Martin suffered a painful collision with the post and had to be replaced by Jon Stead.

Colchester finished the half strongly and James Belshaw had to pull out excellent saves from Noah Chilvers and Harry Pell to keep Town’s goal intact.

The visitors were quickly on the offensive after the break and Will Smith went close with an header,but Colchester turned the game on it’s head with two goals in the space of three minutes.

On 51 minutes a speculative drive from Callum Harriott took a slight deflection off Smith’s legs before wrong footing Belshaw.

Worse was to follow,when the hosts broke down the right and the ball eventually reached Ben Stevenson,who fired into the bottom corner right hand corner of the net from the edge of the area.

headed in Thomson’s corner for his first league goal of the season.

Although Town pressed for an equaliser,they were vulnerable on the break and Jevani Brown broke away to test Belshaw who was equal to the task.

Brendan Kiernan and Dan Jones were introduced to try to rescue a point and the latter’s long throw was headed against the inside of the upright by Kiernan.

Unfortunately,it wasn’t to be Town’s day and they went down to their second 2-1 defeat of the season.

Where there’s a will…

Collision in Harrogate between motorcycle and car

Harrogate-based Jones Myers has scooped a high-profile Family Law Firm of the Year North award and been applauded as a ‘Northern powerhouse’. Celebrating excellence in family law, the Family Law awards – spearheaded by Lexis Nexis – took the form of a virtual event attended by representatives from family practices, barristers’ chambers and sponsors across the country. Peter Jones, who founded Jones Myers as the first family law firm of its kind in Leeds in 1992, said: We are tremendously proud to be selected for this esteemed accolade which reflects our relentless commitment to achieving the best solutions for our
The postJones Myers scoops a high-profile Family Law Firm of the Year accolade appeared first on Harrogate Informer Harrogate Informer…

For 16 Days of Activism starting 25 November to 10December 2020, Soroptimists everywhere will #OrangetheWorld. Each of the 16 Days we celebrate marks a step towards women’s rights and a safe space for them. Soroptimist International believes that women’s rights are human rights and through our work in the communities we work with that objective. Club members are actively involved in supporting the local Women’s Refuge. The Club recently provided household appliances and bedding to help women and their families escaping domestic violence set up home free from fear. ‘Loves Me. Loves Me Not’ bookmarks on healthy relationships, provided by
The postHarrogate and District Soroptimists believe to achieve gender equality appeared first on Harrogate Informer Harrogate Informer…

North Yorkshire has welcomed the Chancellor’s Spending Review statement today, which has set out increased funding levels for councils to help them tackle the next year and to support their communities through the Covid-19 pandemic. Details of how the one year spending programme will impact on North Yorkshire are still awaited, but county council leaders are pleased to note that £1.55bn of additional funding and £300m for social care have been provided in recognition of the pressures county councils are facing in leading the reaction to Covid. North Yorkshire also welcomes the announcement of an income guarantee to compensate for
The postNorth Yorkshire welcomes extra funds in spending review appeared first on Harrogate Informer Harrogate Informer…