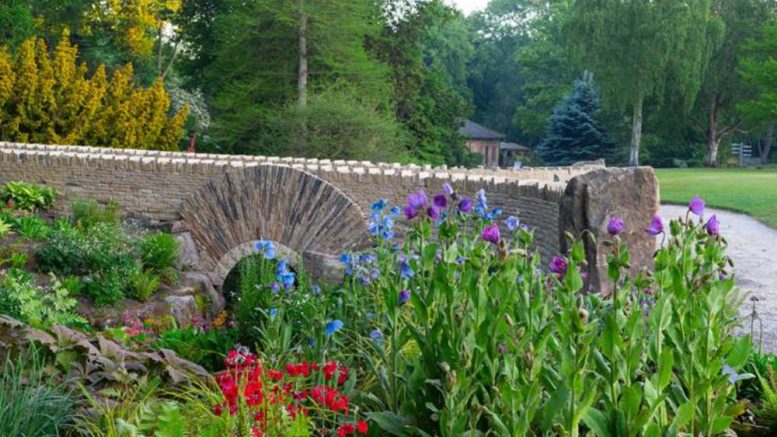 A new ‘Friendship Bridge’ featuring a decorative petal design in Yorkshire sandstone will be unveiled at RHS Garden Harlow Carr on Monday (19 October 2020).

The bridge – most of which was constructed behind the scenes during lockdown by Harrogate-based stone waller Neil Beasley and a team of fellow professionals – has been named ‘The Friendship Bridge’ in recognition of a donation of £10,000 from The Friends of Harlow Carr.

The centrepiece of the design – drawn up by Leeds-based DSWA Master Craftsman David Griffiths – represents the head of a flower, with stone ‘petals’ radiating around a central stonework arch. The Geoffrey Smith memorial stone is positioned at one end of the bridge wall as a lasting testament to a much-loved former garden curator. Soft landscaping and plants suitable for damp conditions such as Tibetan cowslip, hostas and ferns have been used to soften the hard landscaping.

A very generous funding boost from the Friends of Harlow Carr has made this project possible. We now have a beautiful new piece of artwork which has been handcrafted in Yorkshire stone using traditional drystone walling techniques. As well as being a thing of beauty in itself, the work will help to alleviate surface flooding problems.

The Friendship Bridge replaced a former structure over the garden stream at the bottom of the Main Borders which was in need of repair. Stone from the old bridge was incorporated into the design as well as freshly quarried Yorkshire stone from Johnsons Wellfield in Huddersfield and reclaimed slates and riven-bedded sandstone. Neil – who has been working as a professional drystone waller for more than 15 years – is no stranger to the RHS, having played a part in two gold award-winning gardens at the Chelsea Flower Show. He also created Harlow Carr’s striking garden entrance feature and monoliths on the corner of Crag Lane and Otley Road, also designed by David Griffiths.

8 redundancies at the Pupil Referral Service (Grove Academy) in Harrogate

The final stages of repair work to a flood-hit bridge in the Yorkshire Dales have been delayed due to recent bad weather. Cogden South bridge, on the C106 near Grinton Moor, was scheduled to reopen at the end of January but has been extended to February 17. It was one of two bridges destroyed by catastrophic flooding in 2019. Cogden North bridge, on the B6270 Richmond to Grinton road, reopened in November. County Councillor Yvonne Peacock, member for the Upper Dales, said: The reopening of Cogden South is highly-anticipated in the Dales as it is a vital link to our
The postBad weather delays Yorkshire Dales bridge reopening  appeared first on Harrogate Informer Harrogate Informer…