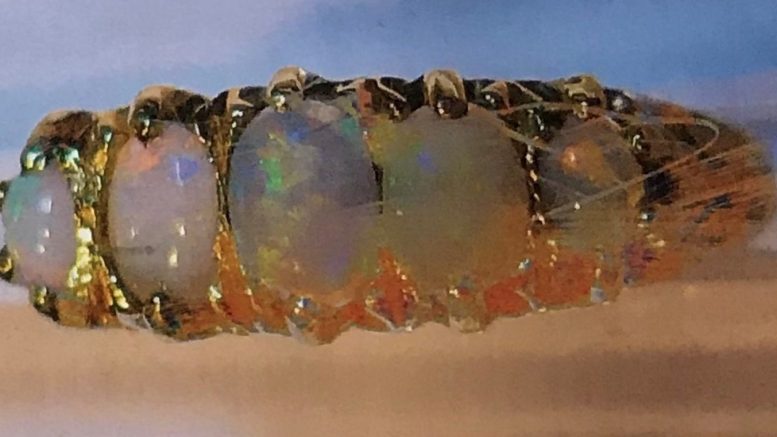 North Yorkshire Police is appealing for information after firearms, cash and jewellery were stolen from a farm in Cononley on Friday 24 July.

The offenders forced open the property’s automatic gates and smashed the back patio door with a brick sometime between 2.40pm and 3pm. The front door and back door were also open.

Once inside, every room was ransacked before the thieves ripped a gun cabinet from the wall, which included three rifles, a semi-automatic shotgun and a quantity of ammunition.

The property’s safe and alarm system were also pulled from the wall and a quantity of cash and a number of sentimental jewellery items, including a five stone opal ring (pictured), an Omega watch, a Tiffany bracelet, and a distinctive gold linked-plate bracelet with silver detail depicting children holding hands, were also stolen.

Detectives have said they are “extremely keen” to trace the firearms. Detective Constable Lynn Maguire of Harrogate & Craven CID said:

“These weapons could be dangerous if they fall into the wrong hands. We are carrying out a number of enquiries to track these weapons down as well as identify the offenders.

“We are appealing for anyone who saw any suspicious people or vehicles in the area at the time of the incident to come forward as a matter of urgency.

“We’d also like to hear from anyone in the village who has CCTV, dash-cam or doorbell video cameras that may have captured something – of particular interest is a black BMW X3, registration YD68 TKF, which we’d like to trace.”

Anyone with information that could assist the investigation is asked to email Harrogate & Craven CID on CIDHarrogate@northyorkshire.pnn.police.uk or call 101, ask for North Yorkshire Police and pass information to the Force Control Room.

If you wish to remain anonymous, you can pass information to Crimestoppers on 0800 555 111.

1 in 3 people in Harrogate, targeted by a scammer since lockdown began says Citizens Advice